The year 2020 is one of the darkest in recent human memory, and the pandemic has changed the world. We'd like to share with you our insight on 2020.

Glossika provides 65 languages in 2020, and the top 3 popular languages are French, Japanese, and German:

Below is the list of the total languages organized by popularity:

Japanese is the most popular Asian language

For Asian languages, it’s not surprising that Japanese is the most popular Asian language. In the year of 2020, although Tokyo 2020 Olympic Games got postponed because of the pandemic, we can still see Japan’s strong presence in many aspects whether it’s animation, culture, or technology. For example, Japanese astronaut Soichi Noguchi is the first international crew member to fly on a commercial crew mission in 2020, and Japanese anime Demon Slayer is the most popular animation in the world.

The second most popular Asian language is Korean. Korean is getting more and more popular in recent years because of its culture.

The Korean movie Parasite (기생충) won the best picture and best director in the 2020 Academy Awards. The Korean pop group BTS was selected as Year of Artist by TIMES magazine and it’s no.1 hit song Dynamite is a worldwide sensation. If you look at the comments below its music video on YouTube, you’ll see fans from across the world.

There are also a lot of users who use Glossika to practice two versions of Spanish. This is effective, but we only recommend this way of learning if you’re familiar with one of the versions.

Taiwanese Hokkien is quite popular

In Taiwan, Taiwanese Hokkien is mostly a spoken language. It does have its writing system, but it's not commonly used. If you are interested in learning Taiwanese Hokkien, we'd recommend focusing on your listening and speaking first instead of trying to read it.

III. Which practice mode is more popular, full practice or listening only?

At the end of 2020, we prepared "Your 2020 Achievements" for all learners. It shows your achievements on Glossika including top languages, accumulated reps and total hours spent. This data is available for download before January 15th, 2021 so be sure to download it on time and share with friends using #glossika2020.

Glossika helps you speak better by using structured learning content. You'll be able to train to speak better gradually by easy to hard, short to long sentences. Sign up now, and start your 7-day free trial: 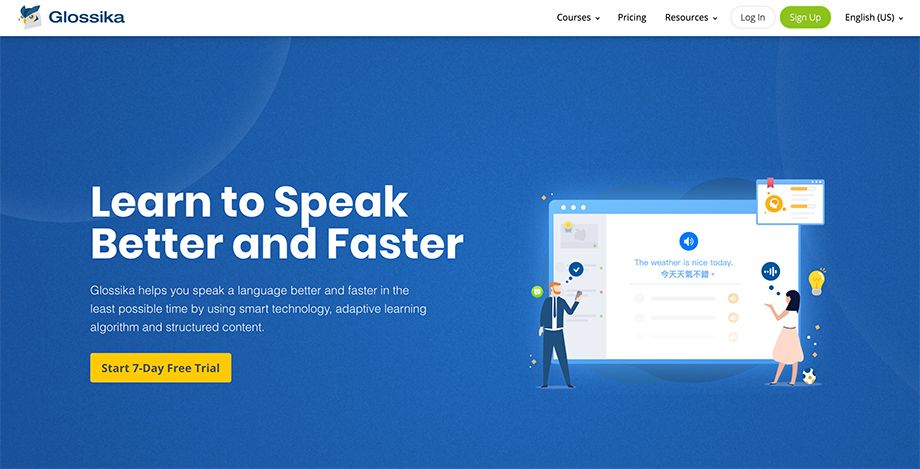 We've been receiving a lot of positive feedback ever since we launched the personalized review function in August 2019.Now after countless testing and optimization, we are extremely happy to announce four new

Italy is one of the most beautiful travel destinations in the world. It is also known for its delicious dishes. Quaint Italian cafés and beautiful restaurants offer the finest traditional cuisine. Knowing how

The Glossika Blog
—
2020 Glossika Year in Review
Share this