Tuo just obtained a PhD at Harvard University and is living in the Boston area. His mother tongue is Mandarin Chinese, but he arrived in Montreal, Canada, when he was 5, where French and English are spoken. So in addition to Chinese, Tuo learned to speak French and English like a native. 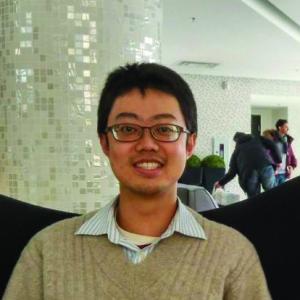 Tuo was first introduced to Glossika by a friend who was using it to learn Russian. His friend had already gone through half a Russian textbook before he started using Glossika to practice his listening and speaking skills.

When Tuo found out about the large number of languages offered by Glossika, he decided to use it to improve his German and learn Portuguese. His experience with languages taught him that he learns better with sentences from everyday life mixing different subjects, which is exactly what Glossika training provides.

The large number of languages that Glossika provides really impressed me. -- Tuo

While busy working on his PhD, Tuo would start his daily routine the first thing in the morning when waking up and occasionally in the evenings after getting back home.

From time to time, Tuo uses Skype with a friend living in Germany. He is planning to start speaking with a few Brazilian people he knows, when he feels a little more comfortable using the language.

Despite the fact that he likes learning in a formal and structured setting, Tuo thinks that once you have acquired a certain basic knowledge in a language, Glossika is the ideal tool to allow you to practice your listening comprehension and be able to express yourself to form increasingly complex sentences.

I do find Glossika very useful in terms of: increasing my vocabulary and conveying relatively useful/common structures I would use on a day-to-day basis. -- Tuo

Ever since he started training with Glossika, Tuo feels like he is more and more capable of forming long, complex sentences in German and Portuguese, which makes him more confident and keeps him motivated to keep on going.

My German sentences become longer and have more structure now. It has really helped me develop my speaking skills. -- Tuo

Maybe you can only do the training early in the morning or late at night, Glossika's audio training gives you the freedom to learn a language anytime. Find a time that works the best for your schedule and make language learning a habit! Join Tuo and hundreds of others who integrate language learning into their lives.

As you may know, medical students have hectic schedules. And Michael is no exception. However, he still finds time to work on his Chinese. No matter how busy you get, and if you

Emilio is an interpreter for the European Union living in Brussels. Originally from Spain, he speaks 5 languages fluently and is learning 2 more. Before moving to Brussels, Emilio lived in Vienna and