With our complete guide, you'll have a good idea of the basic Japanese pronunciation rules and principles involved in speaking and reading Japanese properly. We'll go into the fundamentals of Japanese pronunciation with an in-depth look at Japanese vowels and consonants. For Japanese grammar, we cover everything from nouns, different kinds of verbs, adjectives, pronouns, and more. This will not only help you get started on your way to Japanese fluency, but you'll be sure to make significant progress in speaking, listening, reading, and conversational skills. So make sure you download your free guide to Japanese pronunciation and grammar after you finish this article!

There are 5 vowels in Japanese: {a, i, u, e, o}. While {a, i, e, o} are pronounced similarly to many other languages, {u} is pronounced significantly different.

At first glance, Japanese has relatively few vowels and a handful of consonants that connect to those vowels. These vowels are very easily romanized as {a, i, u, e, o} and actually have different positions in the mouth than the same vowels in English, Spanish, German, or Italian. With {u}, please be careful and don't over-pronounce it.

Japanese tends to be written with a syllabary, meaning that each character is a single syllable. With one caveat -- some of these syllables combine to make larger complex syllables:

Japanese has relatively few, if any, consonant clusters -- this is a point of deception since Japanese does in fact lose vowels in certain positions that in turn create clusters. We'll get into this a little later.

When we pronounce English vowels, we inherently pronounce them long: for example when we describe what we write as {ee}, the long vowel "E," the part of the name labeled "long" really has nothing to do with the method of pronouncing the vowel but rather the articulation. Change the articulation and you get another vowel, for example a short "E."

"Long" is just a name. However, in reality, the method we use to pronounce all of our vowels are "long." This means that our voice trails off.

So the question is, can we pronounce the same vowel "short" in English? Yes, when this happens we need to close the syllable with an unvoiced consonant such as in "meet." In this word, the long "E" has a short length rather than the long length in the word "team." Stop and think about this difference for a moment, practice it and understand it.

This long trailing off of vowels simply doesn't happen in Japanese. All vowels are pronounced short and clip. The macrons you see over the vowels in names like "Tōkyō" are what actually indicate when vowels are pronounced long. But even in this case, they are just a double length of the short version and may still sound a bit unnatural to the English or Chinese ear.

The vowels {a, i, e, o} are actually very close to their Spanish or German counterparts. Even closer to Finnish if you happen to know it. The big difference is in the letter {u}.

If we look at the IPA table, the letter {u} is actually positioned extremely close to the English short "I". There's a fine line here between what English speakers will perceive as {i} or {u} and this Japanese letter straddles that line. Listen carefully to native speakers and practice it. 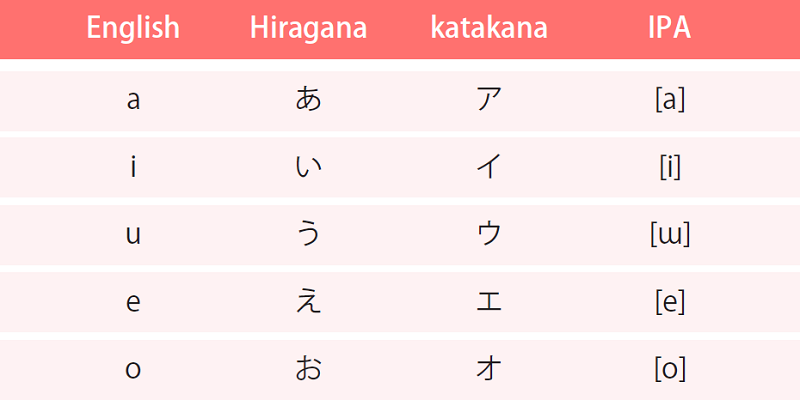 Each of the vowels are paired with corresponding consonants, which in turn make up the Japanese syllabary writing system. Most of these letters are the same as in English:

The following letters have limited vowels they pair with:

There are a few key differences from what we're familiar with as English speakers:

{si} is pronounced similar to English {shi} but with the tongue pressed against the lower teeth. This is the same sound that appears in several other languages: Korean (시), Mandarin (xi), Polish (śji), Croatian (śi), Russian (щи), Sanskrit (श).

Likewise, {ti} is pronounced similar to English {chi} in the same manner as {si} above (with the tongue pressed against the lower teeth). This same sound is also found in several languages: Korean (지), Mandarin (ji), Polish (ćji), Croatian (ći), Russian (чи), Sanskrit (च). The Japanese version will have slightly more aspiration than some of the other languages.

{f + u} is pronounced without the bottom lip touching the teeth. This is written in IPA as /ɸ/. This letter appears with the other {h} letters and can be considered a rather strong {h}.

{r + a|i|u|e|o}: the closest resemblance in English or other European languages is the flap.

{n} is normally found at the end of a syllable, but in Japanese can also stand for a syllable all by itself (meaning, it's given the same time length as other syllables). The letter sometimes sounds like [m], sometimes [n], sometimes [ŋ] as in English "sing". Its actual IPA symbol is [ɴ] which means that it's pronounced farther back in the throat than [ŋ]. This sound does not exist in English or neighboring languages Korean and Japanese, so it will take some practice to get right.

Japanese is essentially a language isolate. This means that according to linguists and scientists who study language, there is not enough evidence available today to prove the existence of relation with any other language.

On the surface, Japanese resembles Korean in many ways, both syntactically and stylistically. These two languages are theoretically grouped with a larger language family called “Altaic,” which includes Turkic languages and Mongolian. For anybody who knows Turkish, you'll probably find a lot of grammatical similarities with Japanese. However, as linguists point out, there isn't enough evidence to prove that a relation exists.

Japanese is different from English in virtually every possible way. To learn Japanese through an English construct or English way of thinking is misleading. Although Glossika does teach you a large number of sentences and patterns via English, you'll soon find that such a crutch will have to be dropped once you start getting into real Japanese conversations.

For example, our sentences may introduce you to pronouns about who is doing what, however Japanese isn't just a pronoun-drop language. It is actually a stylistic difference as well, as there is no marking of who does an action on the verb (verbs don't conjugate in the European sense). Stylistically speaking, the doer of the action is supposed to be obvious based on the context of the conversation.

Therefore, in many of the sentences that you learn, much of the identifying information can be dropped in real conversation.

To learn to speak Japanese properly means that you need to start thinking about how the Japanese construct a sentence from their way of thinking. We find that this is true for most East Asian languages, including Chinese, which is just as different from Japanese as it is from English. Because of this, it's important to learn Japanese by example as a native speaker would speak rather than constructing what you think would be a valid Japanese sentence. Saying something that you believe is a complete idea (both logically and semantically) that a Japanese person may not be used to or may not have heard before could result in a complete misunderstanding or just nonsense to the native speaker. Rather than translating from your native language to Japanese, you'll have to "translate" your translation into a Japanese way of speaking. This is why we recommend learning through example sentences until you have a better sense of the grammar structure.

As a foreigner coming into contact with Japanese for the first time, a basic level of respect would be expected -- after all, this is the first time you've met the person and feelings can be offended quite easily with the wrong choice of words. A major difference with how most western languages are becoming less and less formal: people are opting for the informal you (tu, du, ty, ты) over the formal you (Usted, vous, Lei, Sie, vy, Вы) as quickly as possible when meeting someone. Take note: this is not a trend that you'll want to continue in Japan. It is best to stick with the person's name followed by -san instead of using "you".

Despite these hurdles, let's start taking a look at how to construct basic Japanese sentences:

A Japanese sentence is in the order of Subject - Object - Verb and it prefers postpositions attached to the ends of words rather than using prepositions.

Various things can be attached to the ends of sentences, and even make the whole previous clause as part of a new embedded clause for something that is coming up.

End a sentence with "-yo" よ when putting emphasis on something new that you're informing the listener about.

End a sentence with "-ne" ね as a tag question like "right?" or "isn't it?" You can combine it with the previous particle to create "-yone."

Try to get into the habit of thinking about which particle every word will take.

This adding of postpositions means that every noun in a sentence is marked by some particle. We'll go more in-depth into the specific grammar rules for nouns, different types of verbs, different levels of formality, adjectives, pronouns, common particles, and much more.

Now that you know the basic Japanese pronunciation and grammar rules, you can go more in-depth by downloading our free guide to take your fluency and understanding of the Japanese language to the next level!

Introduction to Mandarin Chinese Pronunciation & Grammar Mandarin Chinese has a reputation of being one of the most difficult languages in the world. The reason for this common belief lies primarily in the

Get to Know About Mandarin Chinese Before You Learn It Mandarin Chinese, one of the most important and widely spoken languages in the world, has a long and rich history that originates from