"Love has no distance" is a true testament to the relationship between Shihkai and Emilia, the Taiwanese-Polish couple as featured on the channel "Polish Girl X Taiwanese Guy: Meet the World from Home". 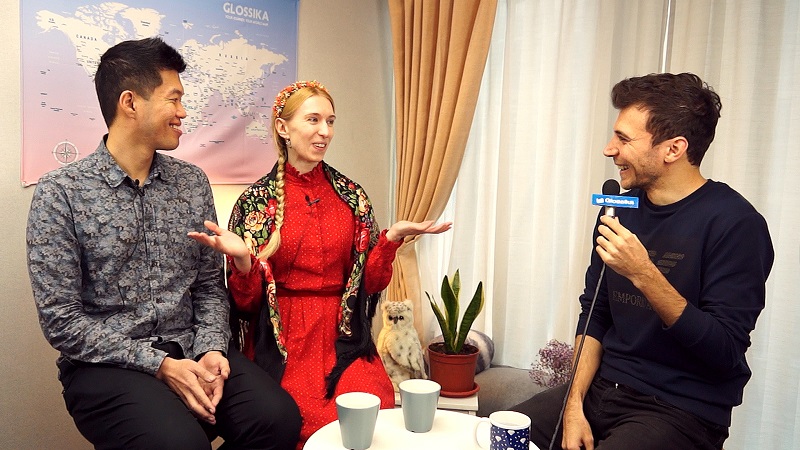 What is the Lure of Chinese?

Since coming from the perspective of Polish, with its 32 letters, Chinese is literally something from a different world: the writing consists of characters made up of combinations of strokes, and a separately memorized pronunciation for each character. But this was just part of the lure for Emilia.

As a music major, Emilia found the melody of Chinese beautiful and was deeply impressed by the complexity of Chinese tones. She believes that with a little practice, Chinese really isn't all that difficult to learn. She humbly admits that it's still hard for her to pronounce a few sounds like è (餓; hungry) and yuán yuè (元月; January), for which have no direct phonetic reference in Polish.

Sighing over this fact, her husband, Shihkai, cheers her on with a smile. As much as Emilia still feels somewhat helpless by certain Chinese tones, everybody at Glossika feels she pronounces them very well. In fact, her command of Chinese is so good, that she really adds her own flavor to the language.

So we sit down to find out what her secret is.

Which Education is Better: Focus on Conversation Skills or Writing Skills?

Starting in middle school, Polish students are required to learn a second language, where Russian, Spanish, German, and French are the most common choices. Aside from the mandatory curriculum, most Polish people still learn more than 3 languages out of pure interest, where Emilia speaks 4 (Polish, Russian, English, Chinese) and her sister speaks up to 7 (Polish, Russian, English, French, Swedish, Chinese, Irish), respectively.

Another interesting aspect of Poland's language education is the focus on "conversation" or speaking the language. However, this way of learning wasn't something that Emilia experienced in Taiwan. Through her observation, most Taiwanese students are great with grammar and vocabulary, but when it comes to actual communication, they seem to lack confidence. Coincidentally, Imad, who also studies in Taiwan, often enjoys great English conversations with his Taiwanese friends online, but not so much in real life. Sure enough, one may be a prolific writer, but not necessarily a great speaker.

What is the True Motivation in Language Learning?

An active learning attitude is the true motivation behind growth and improvement.

Shihkai shares his consideration on learning a new language: "The most important factor for me is that I must be attracted to it because language learning is a long-term plan." Emilia agrees, then adding on her point of view, "I usually choose something that's good-sounding to me, or if I'll have the opportunity to use it." She actually chose to learn Russian based on this method: she liked the sound of it, and it helped her acquire valuable research information from many Slavic websites.

Once a desired language is chosen, many people wonder about the cost of becoming a fluent speaker. Unfortunately, no one can say for sure, but what we learned from Emilia and Shihkai is that it's absolutely essential to stay enthusiastic about language and learning.

"Fluency doesn't mean that you understand every word in a language."

Emilia and Shihkai's take on fluency is simply being able to engage in a "deeper" conversation. "As long as you're able to express your honest opinion in a discussion, it's not that big of a deal to miss a few words here and there."

How to Adjust to Real World Language

Emilia studied (both traditional and simplified) Chinese at the University of Warsaw and graduated at the top or her class before coming to Taiwan to pursue her degree in music. However, life at first wasn't as smooth-sailing as she had expected...

Suddenly surrounded by the living language, she couldn't understand what the locals were saying, let alone hold a conversation with them. She literally had to re-learn Chinese in terms of tempo, tone, colloquial usage, and how it was spoken in Taiwan. There was no textbook for her to make references to or notes to remind her when to say the right thing. This was when Emilia realized that her Chinese wasn't as good as she thought it was all along!

Adding to her language clash, Shihkai once told Emilia about a friend's sad story on getting ripped off by a (ticket) scalper. Since a scalper in Chinese is huáng niú (黃牛; literal translation: "yellow cattle"), Emilia was confused for the longest time and couldn't figure out just how cattle was able to sell tickets. After this rather amusing episode, Shihkai adjusted the way he communicated with Emilia, and always explained things that might have other literal meanings. And over time, Emilia owned up to her Chinese, and now her speaking is as natural as any native speaker in Taiwan. 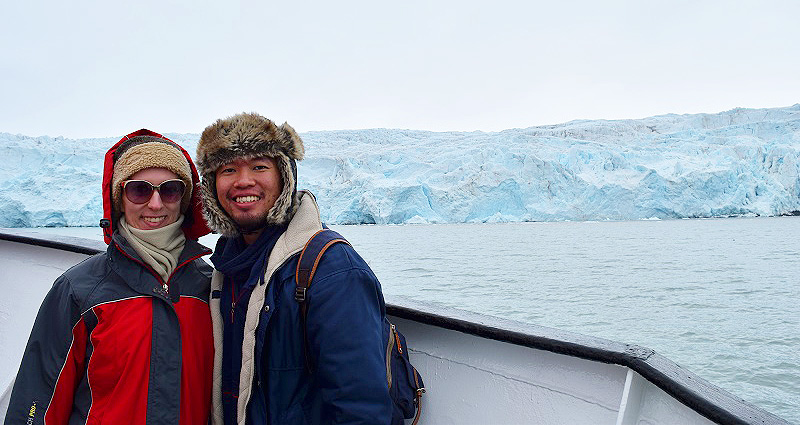 How Language Evolves into a Relationship

How has language impacted Emilia's life?

If she hadn't learned Chinese, she wouldn't have flown to Taiwan for a new chapter in her life, in an environment where she immersed herself and re-learned everything she knew about this language. And because she's fluent in Chinese, she's been able to complete her research project, and communicate with Shihkai's family and friends without any barriers.

"I don't need Shihkai to be my interpreter if I'd like to get to know someone better."

Emilia spoke with such confidence, as she explains that English isn't the only option for people who can't speak another language. When given the opportunity to be in a new environment, what you should do is adapt to it the best you can – absorb the culture and learn to speak the language!

As for Shihkai, his interest in learning new languages lead to the beautiful encounter with his wife, Emilia. And because he can speak English, he had the opportunity to work overseas and meet people from all over the world. His most memorable experience was couch-surfing in Singapore, which helped him gain some recognition before he finally met the woman of his life through a mutual friend in that social circle.

What is the Required Consistency in Language Learning?

Shihkai is one of the few people that's learning Polish in Taiwan, as there are very little learning resources available. In terms of language difficulty, Polish is the second hardest language (after Russian) to learn, for people who are native Chinese speakers. He talks about the obstacles in his learning experience, where Polish grammar consists of complex variations, and he isn't able to figure it out from the perspective of Chinese grammar.

Meeting Emilia's family for the very first time was just as hilarious as it was unforgettable. Prior to the visit, he had secretly learned some Polish from youtube videos on basic greetings, introduction, and counting from 1 to 10 – hoping that he'd surprise them. Only when they arrived Emilia's home, Shihkai was too nervous and forgot everything he had learned...except for counting from 1 to 10 – so that's how he greeted his future parents-in-law for the first time!

Whenever he looks back on this memory, Shihkai wished that he could have practiced more. The way he overcomes his learning plateau while learning Polish is through consistent practice every day. It's much more effective to train for 20 to 30 minutes everyday, rather than spending 2 to 3 hours at a time on any given day of the week. He highly recommends his "slow and steady" method, while paying close attention to Emilia's Polish on a daily basis. After all, it's best to get in touch with the language one's learning everyday, or whenever possible.

What are Emilia's Learning Techniques?

As an experienced learner in several languages, Emilia has developed some learning techniques and must-try routines for those who are interested.

Learning methods should involve both passive (reading and listening) and active (writing and speaking) training. The exclusion of any element will restrict the overall application of the language. Transcribing a favorite story or song lyrics is a great way to improve writing skills, but if speaking is a priority on the agenda, then repetitive speaking training is the key.

“Set up small goals and feel proud when you’ve accomplished them,” Emilia said. Language learning isn’t just for exams. Figuring out one's learning purpose and short-term goals is only the beginning. Pacing oneself and finding a comfortable learning speed is just as important as staying disciplined and committed. Taking one thing at a time, and progressively tackling all aspects of your learning will lead to great results.

During the interview, Shihkai and Emilia held each other’s hands affectionately, always showing great support for each other.

Emilia’s love for the melody of Chinese opened up her world and broadened her vision for new cultures. Chinese has become her new native language, a way of living that's built upon passion, dedication, and commitment.

And Shihkai, who used to be an engineer faced with enormous work pressure, found a new way of life through speaking English to make new friends, where he seized the occasion to meet his wife and fall in love with Polish culture.

Being 8719 km apart, their lives have forever changed by the languages they speak. Their destinies have also been greatly fulfilled because of the choices they've made.

Fall in love with any language and make learning a part of your life!

Glossika focuses on helping you achieve fluency. Our unique algorithm provides you a personalized learning experience, using syntax to internalize grammatical structures and increase your vocabulary through daily training sessions.

Modal Particles: One of the Unique Components of the Chinese Language Modal particles can be used by itself or with different tones and parts of speech to indicate different moods. Compared to some

The Glossika Blog
—
A Taiwan-Poland Language Encounter
Share this