In the last episode of #HangoutWithGlossika, we are very honored to have Mr. Yokita Lim, who is very knowledgeable and passionate about the Taiwanese language, with us. He's the founder of Facebook page - Taigi kho. He also offers a great variety of Taiwanese classes, including Business Taiwanese, Medical Taiwanese, etc. Mr. Lim also has extensive experience in teaching foreigners and solving the problems that Taiwanese learners might run into.

As a person who is familiar with more than 10 Taiwanese accents, Mr. Lim can switch between accents accordingly. He studied the phonological evolution of Classical Chinese and Classical Taiwanese. He's also very good at comparing phonemics in different languages. Thus, he'd start off one's Taiwanese learning journey by comparing the phonemics of a learner's native language and Taiwanese.

During the interview, he shared his knowledge of the Taiwanese language with us. He taught us some unusual reduplications and idioms that we can use next time when we speak Taiwanese as well. 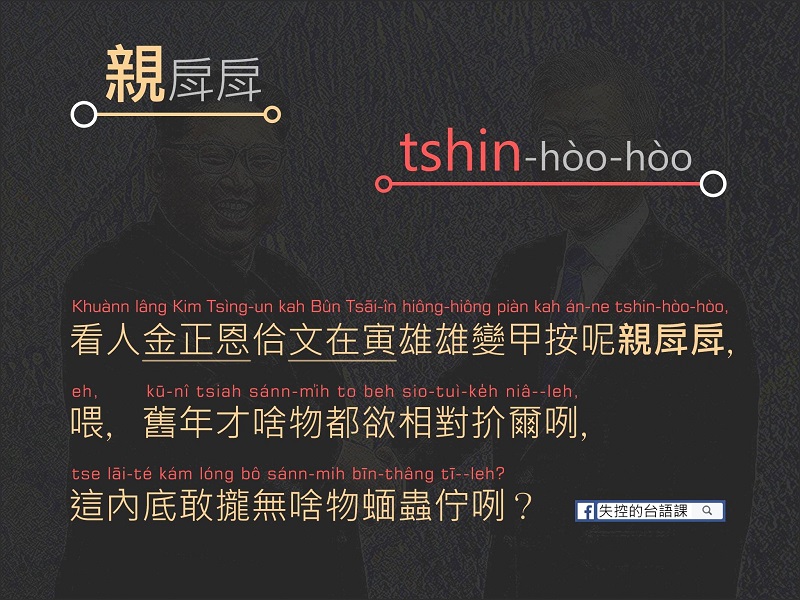 Claudia: We know that you've been teaching Taiwanese for some years now, besides Taiwanese people, your students also include people from different countries. Are there any sounds that foreigners can't pronounce?

Yokita: Yes, there are tones that people from other countries have hard times pronouncing. For example:

But guess what? The foreigners can pronounce some sounds that Taiwanese people can't surprisingly well.

Claudia: I heard that you know more than 10 types of Taiwanese accents. Are they differentiated by regions or by occasions?

Yokita: I did language research around Taiwan and developed a system a few years ago. If you are fluent in a language, you'll still be able to understand people no matter what their accents are. Next time when you hear people talking in Taiwanese, pay more attention to their conversation, and you'll realize they all speak with different accents. It's not necessary to switch your accent, but it can serve as a good icebreaker sometimes.

Claudia: How is colloquial reading different from literary reading?

Yokita: This is something we native speakers often overlook. Both readings can usually be found in one sentence or even in one word, so it can be hard to notice and distinguish them. For example:

生死有命 (Your life is pre-determined)

You might think the words are said differently because of the accents. But, that's not the case here. We say the idiom using literary reading and explain it with the colloquial reading.

Be mindful that sometimes different reading might convey a very different meaning! For example:

When we fully understand the concept of these two readings, we won't mix them up as often. Sometimes, it's not a big deal to pronounce a word wrong. But for some words, you have to be very cautious about its reading.

Claudia: There are 4 tones in Mandarin, and Taiwanese has 7 or 8 tones, which is 2 times more than Mandarin. I know tone sandhi is another feature of the Taiwanese language, but can you tell us more about it?

Yokita: Actually, tone sandhi occurs in most of the words in a sentence and it happens quite regularly. Below is a tone sandhi graph. 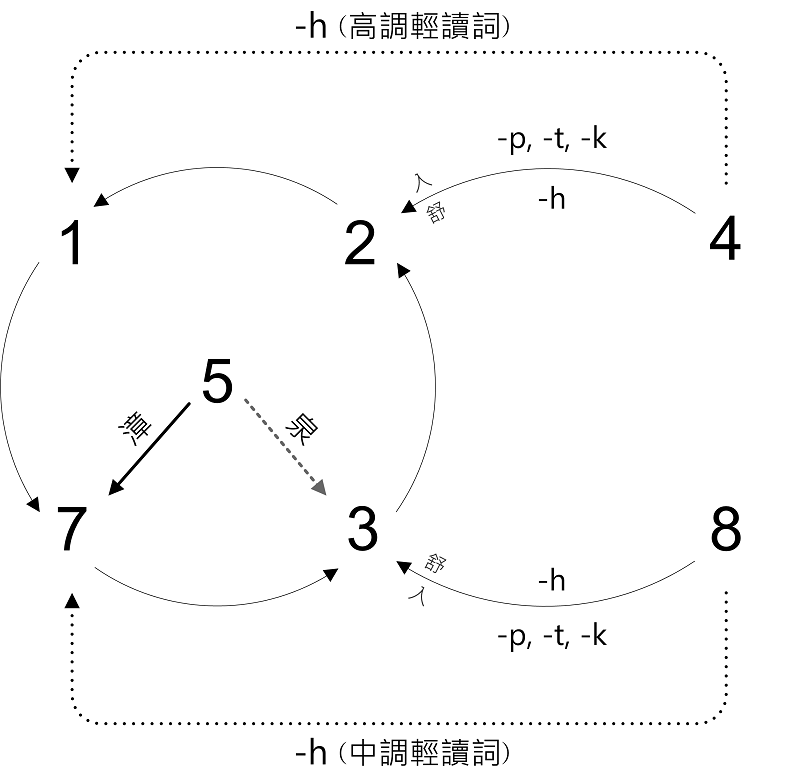 Tone sandhi is a quintessential part of the Taiwanese language. If the tone is off, the meaning will also change. Here are some interesting examples:

Yokita: In the lyric, the difference between them is 游 (siû) doesn't have a nasal sound, and 想 (siūnn) has a nasal sound. Other examples are: tree- 樹仔 (tshiū-á) & wall- 牆仔 (tshiûnn-á) and good song- 好歌 (hó kua) & healthy liver- 好肝 (hó kuann). This is another feature of Taiwanese. You can also find nasal vowels in languages such as French and Portuguese.

Claudia: In today's world, more and more words from different languages are used among the younger generation. How should we say words such as DNA and Facebook in Taiwanese?

Yokita: When a language is alive, people will keep developing new colloquial or professional terms. So how do you know a word that didn't exist in the Chinese or Taiwanese language 50 years ago is pronounced correctly now? In a situation like this, we often know how to express those terms in Taiwanese. But we are all afraid of making mistakes. Be bold and create your own words! If people like the way you say a specific word, they will carry on your sayings, and more and more people will start using the term.

Claudia: We all know at the beginning of one's language learning journey, one might not have the perfect pronunciation. How does one adjust and improve?

Yokita: Well, the first step is to find out what sounds the person is pronouncing wrong. Is it that he can't pronounce the nasal vowels? Maybe he can't get the checked tone or voiced sound right. Or is it because his tones are different from others? Once the person has figured out what his problem is, it'll be easier for him to improve. He can start focusing on his problem(s) and pay more attention to those details when others are speaking.

Claudia: What would you tell someone who wants to learn Taiwanese from scratch? What are some of your recommendations?

Yokita: In my opinion, the best way to do it is to start with listening and speaking only. Don't sweat the reading and writing parts just yet. You should practice speaking as much as you can and talk about things you're interested in with Taiwanese speakers around you. You might not understand anything at the beginning, but this is also the fastest way to learn. If you learn the language immersively, you can start holding basic conversations with people in a week. And you'll be able to speak and listen fluently after a month.

Claudia: To start speaking Taiwanese as soon as possible, start with listening and speaking. You can watch TV shows and dramas to practice your listening, and you can talk to the elders or other Taiwanese speakers around you, to practice your speaking. If you immerse yourself in a Taiwanese environment, you will improve fast.

By using Glossika as your language training resource, you will be able to mimic the way a child acquires a language while getting optimal results by immersing yourself in your target language on a daily basis.

Learn Spanish by Reading Spanish Books All in the sudden, you're carrying full-on conversations without stumbling upon a word. You understand the lyrics and movies in Spanish. You also have no problem figuring

Have you been thinking about learning the Chinese language? Don't let the complex characters keep you away! Focus on this one thing at the beginning of your Chinese learning journey, and it will help you get fluent before you realize it.

The Glossika Blog
—
Taigi Kho: Preserving and Passing on the Taiwanese Language
Share this