What are the Differences Between Spoken French and Written French?

You may have noticed that written French is quite different from spoken French. Many people complain that French is not spelled the way it sounds. They may be referring to the unpronounced e’s and final consonants and the ends of words, or perhaps the number of letters that appear in a single syllable. In addition to this, there are many homophones, e.g., foi, foie, and fois, which mean “faith”, “liver”, and “time”, and are not all the same gender. In contrast to other Romance languages, French phonology has undergone drastic changes in the sounds of words as compared with its Latin parent forms, with the grammar and vocabulary of the modern language being extensively standardized in the 17th and 18th centuries. In addition to the rapid phonological changes as compared with its graphic representation, there are certain grammatical structures that are used mainly in writing and not in everyday speech.

French spelling is actually quite a bit more consistent than English. Once you remember the sounds associated with what appears graphically on the page, you will be able to pick up most texts and read the words more or less accurately, even without having seen or heard them before. This isn’t so much the case in English. If you hadn’t grown up knowing the words in the following sentence, imagine how difficult this sentence would be: “I initially thought this was tough, but then, after thorough consideration, I found freight to be a good enough shipping option for my nephew Thomas.” Parsing out the th and gh sounds might result in many lengthy sighs accompanying rough guesswork.

Granted, there are variations on combinations of letters in French as well, but these are less frequent. The ending -ault will be pronounced /o/ and -chouc will be pronounced /ʃu/ pretty consistently. One variation that does prove difficult in the initial stages of learning the written language appears in Jean-Pierre Jeunet’s 2001 film Le Fabuleux Destin d’Amélie Poulain, when little Amélie is having a reading lesson with her mother and reads: “Les poules couvent souvent au couvent.” As she reads, she mistakes the -ent ending in the adverb and noun as being silent, the way it is in the verb, resulting in /le pul kuv suv o kuv/ rather than /le pul kuv su vɑ̃ to ku vɑ̃/. Her mother’s response is to whack the table in front of her with a ruler. (How do you think a French-speaker would pronounce “whack”, by the way?) 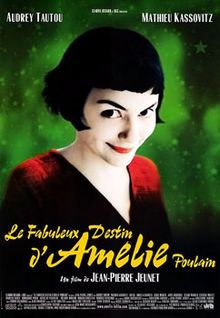 You might see the differences between spoken and written French represented in text messaging – quelle horreur ! – in which you might find phrases such as: “T’es belle. Ch’peux avoir ton telephone stp.” Luckily, for language purists, smartphones, especially those with swype options, make it much easier to write normal sentences.

As seen in the above phrases, dropping the e’s in French is quite common, particularly in rapid speech, which is what gives us the contraction in the first sentence above between “tu” and “es”. Dropping the e from “je” is also common in spoken French, which may make the initial consonant sound more like the unvoiced /ʃ/ rather than /ʒ/; these two fricatives are quite close phonetically.

Another characteristic of spoken French is the tendency to drop the “ne” in negations. If you were to do this on a French exam, you would get points taken off, but in everyday speech this is frequent. Thus we have “Il vient pas à la fête” rather than “Il ne vient pas à la fête” and “J’arrive pas à le faire” rather than “Je n’arrive pas à le faire”. This is so second nature that I honestly cannot tell you, after a dozen years of giving French lessons, whether or not I do this while I’m teaching.

If we put together the above characteristics of spoken French, we have phrases such as “Ché plus” for “Je ne sais plus” – Brigitte Bardot says “Ché pas” quite a few times in Roger Vadim’s 1956 film Et Dieu... créa la femme. Being a naïve woman who runs in nature with animals, of course there would be many things she didn’t know – particularly about the men she encounters in the film.

In fact, there are quite a few sounds that are dropped in spoken French, particularly in rapid speech. Let’s look at instances in which we use phrases that seem to be Japanese – at least on paper: Taka Yaka.

Taka – or “Tu n’as qu’à” may be used when you are describing a very simple thing a person can do to address an issue:

Yaka – or “Il n’y a qu’à” may also be used when describing a very simple solution to an issue, but in a more impersonal way:

One of these is the inversion of subject and verb which, although not so uncommon in everyday speech, appears with more frequency in text. We would write “Que disais-je” much more often than we would utter it and we would probably not ask “Arrive-t-il à la plage ?” during a beach outing. We would, however, find a certain elegance in the following phrase: “Pourquoi la lumière éprouve-t-elle le besoin d’être plus rapide que tout ? Elle veut sans doute arriver avant tout le monde, mais où, et pourquoi ?” (from Les euphorismes de Grégoire, Tome 3, [2017]).

Other types of phrases you would see more often in written French include tenses and modes that are considered to be literary:

Distinctions between written and spoken French may seem pronounced, but they do give a different flavor to discourse. These differences can give you a glimpse into the history of the French language and remind you that French continues to evolve and change, regardless of the extent to which it has been standardized and codified. It may also be interesting to see the way in which new words are incorporated into a language that has such a marked difference between its spoken and written forms, and to see which avenues these new words take in becoming part of social discourse.

There's no obligation and no credit card required! Click to get started 👇🏻