Introduction to the German Language

When you hear people speak in German, you might think that it's an extremely difficult language to learn just from listening to it. You may have tried a lot of different techniques or methods trying to figure out the best way to learn to speak German, but perhaps they didn't work out. In this article, you'll learn not only the background and basics of the German language, but also find out how to learn the language in a fast and effective way.

German is an Indo-European, West Germanic language spoken in central Europe and is an official language in half a dozen countries, including Belgium, Austria, Switzerland, Luxembourg, Liechtenstein, and of course Germany. Aside from these countries, German is also recognized as a minority language in countries such as Italy, France, Czech Republic, Russia, Poland, Denmark, Hungary, Romania, and Slovakia. There are over 90 million native German speakers, and another 20 million who speak German as a second language while a great deal more learn it as a foreign language.

The history of the German language goes back many centuries, with evidence of ancient German text going as far back as the 8th century AD. German literature is a big part of both German history and culture. Many well-known works include poems, epics, and other stories. Below, you can find some examples of the most famous German epic poems.

Hildebrandslied, one of the first German epic poems ever written, was originally written in Old High German. It tells the story of a father and son meeting as enemies in battle without knowing each other's identity. 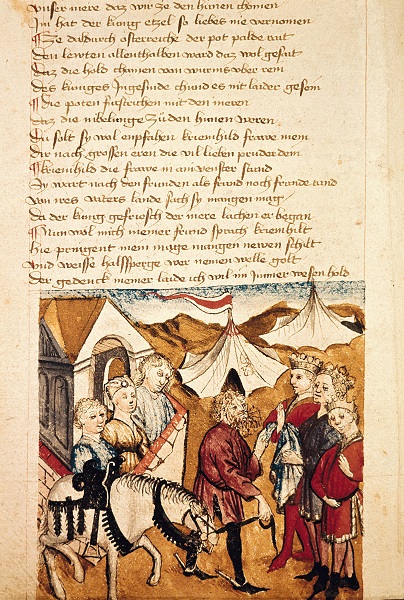 Parzival, written by the poet Wolfram von Eschenbach, was originally written in Middle High German. It tells the story of the hero Parzival, or Percival in English, and his quest to obtain the Holy Grail. 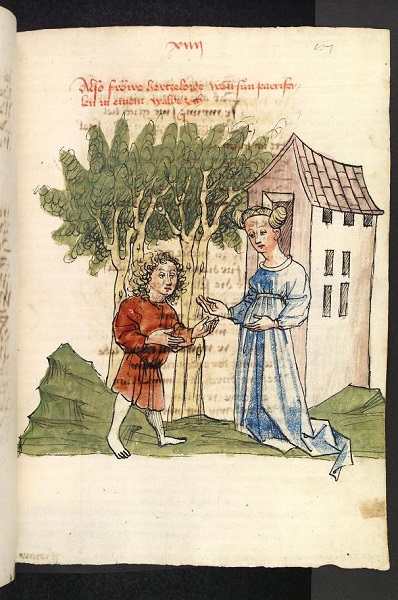 You've probably heard of languages like Spanish and French that have two genders and of course, languages like English that have no genders in their nouns. The German language doesn't have one gender, or even two genders, but three different genders! While many languages have feminine or masculine words, German also has neuter words for words that are considered neither masculine or feminine.

The German language is filled with compound words, and they can sometimes end up being rather long. For example, the compound word “rindfleischetikettierungsüberwachungsaufgabenübertragungsgesetz” can be translated to: “The law for the delegation of monitoring beef labeling”. German compounds combine everything into a single word instead of splitting them up into smaller, separate words. Seeing this for the first time can be extremely intimidating for someone who's learning German. But not to worry! Although it is the longest compound that the German language has ever put into use, it has recently become defunct, meaning it's no longer in active use. The longest German compound in active use is “Rechtsschutzversicherungsgesellschaften” which means, "insurance companies providing legal protection." Still quite the mouthful but certainly more manageable!

The first ever mass produced print book was actually written in German. The Gutenberg Bible was printed by Johannes Gutenberg in the 1450s. Just 49 copies of the Gutenburg Bible survive to this day, and it is said that no two are exactly alike. Some of them aren't even printed on paper, but on vellum, which is made out of calfskin! The Gutenberg Bible marked a historic event in Western civilization as it paved the way to the mass production of printed books on a more widespread level.

Over 60% of German and English words are shared. That means if you're a native English speaker, you most likely already know a good portion of German vocabulary! English and German are both West Germanic languages so they're actually very closely related. Despite being very similar, the German language does have one more consonant than the English language. That is the letter, “ß” which represents the double SS sound. Sometimes you can use “SS” to replace that letter, but only in situations where it wouldn't spell a completely different word. For example, "masse" means mass, but "Maße" means dimension. So as you can see, just a one letter difference can change the meaning entirely!

Did you know that there are quite a few German dialects? In some cases they are so different that they can be unintelligible by other fellow German speakers. Dialects from Germany can be divided up into Low German and High German, with many other overseas dialects. Below, you'll find a few of the major German dialects that are important to listen for.

Swiss German, also referred to as Schweizerdeutsch, Schwyzerdütsch, or Schwiizertüütsch, is an Alemannic dialect that is spoken in parts of Switzerland by nearly 5 million people. Swiss German and Standard German are mutually unintelligible, which is why when a Swiss German speaker appears on television, subtitles need to shown for people to understand.

Bavarian, known as Bayern in German, is a German language spoken primarily in the German state of Bavaria, Austria, and South Tyrol by over 14 million speakers. While most educated Bavarians are able to read and write Standard German just fine, there is some difficulty when it comes to listening and speaking, especially because of the difference in pronunciation.

There are many benefits of learning German. It is a widely spoken language that will open you up to a world with new people from different countries. After English, German is the second most commonly used scientific language, so learning the language gives you access to important research and documentation on some of the most interesting advancements and discoveries. It is also the language of many writers and inventors, both modern and ancient. German has a depth that is very unique to the language and offers important shades of meaning to words that you might not find in other languages.

For example, you may have heard of the word “Schadenfreude” before, even if you don't speak German. That is because the word perfectly captures a universal feeling that many are very commonly familiar with. The word describes the feeling of pleasure you get from another person's misfortune.

Of course, there's more to the language than having access to words that describe a unique feeling, or even meeting new people. Germany is known for its world class education and its availability to not just the people of Germany, but also to aspiring students from all over the world. Education provided by German schools are known internationally, and it is very common for people from different countries to seek out education at these schools in order to take advantage of such a rich education at such low costs. By learning German, you too can open the door to new opportunities in German education as courses are in large part, all taught in German.

Below, you'll find some examples of very basic German phrases that can help you get started learning the language. The chart below gives you an idea of how German text looks like and how it compares to English. There are also some clips of audio samples so you can get an idea of how German sounds like.

What's your name? Where are you from?

Now that you have some basic understanding of the background and nuances of the German language, go one step farther and just start learning German without hesitation right away! Glossika provides you with the best way to learn to speak German and really achieve fluency. Hop onto the platform and start learning for free today!

Introduction to the Dutch Language Contrary to its reputation of being difficult to learn, Dutch is actually one of the easiest languages to learn for English speakers. In this article, you will learn

All Formosan languages are coming to Glossika's online platform soon. We hope to enable the access to these rich and valuable languages to the whole world, assisting and ensuring their survival for generations