Get to Know Korean Pronunciation and Grammar Rules

Although Korean has a completely different writing system from English, it is by no means nearly as difficult as you think it is. In comparison to languages such as Chinese and Japanese that requires you to learn characters one at a time individually, the Korean alphabet is actually quite straightforward.

When you do get into pronunciation and grammar, be sure to download our free ebook Korean Pronunciation and Grammar Guide to get a good understanding of all the different letters and rules involved in both speaking and reading Korean properly. By following our Korean language learning hacks, you will be able to practically applied what you've learned to real life situations in order to progress at a faster rate.

The Korean alphabet and pronunciation system at first glance are not hard to learn. It is when you need to start applying sound change rules that the system can get a bit tricky.

We'll go over the basics here, but you may refer to the Korean Hangul infographic (below) to learn the alphabet very well. In addition, the Glossika IPA Channel and relevant image representing the sound of alphabet in your mouth will be a great source for you to acquire the accurate pronunciation.

There are two ways we can view an alphabet such as Korean:

If you're learning the Yale romanization, then technically 애 and 에 are 아 and 어 followed by 이 {y} resulting in: ay and ey, respectively. 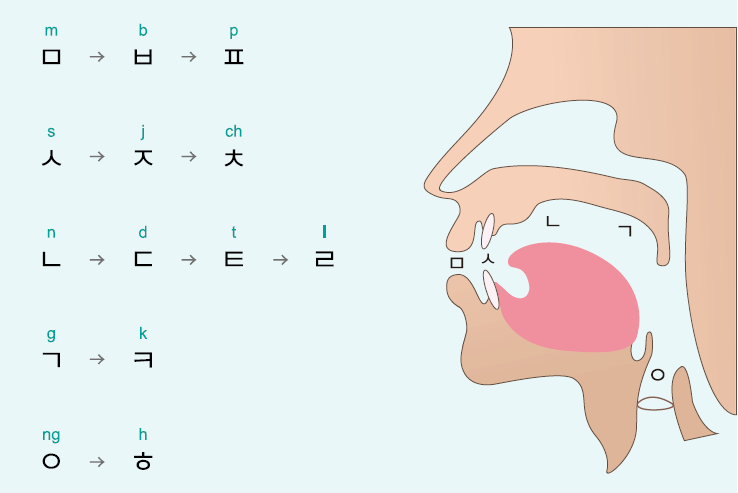 Korean does not distinguish between voiced and unvoiced consonants as we do in English. Instead they are in allophonic variation with each other. Allophonic variation means that a letter is pronounced in one way (unvoiced) under a certain condition and another way (voiced) in another condition. An example of this is the English letter {t}: in "top" it is aspirated, in "stop" it is unaspirated, in "better" it is flapped, and in "gotten" it is a glottal stop.

Korean [r, l] are also in allophonic variation. You may have noticed that Koreans don't always get these sounds right when speaking English, but this is because they are considered the same sound in Korean, and tightly influenced by the conditions in which they manifest. In English, the conditions are different, and the sounds can be isolated as separate sounds which is why it can be difficult for a Korean speaker. In fact, [r, l] have another allophone: [n].

Korean is essentially a language isolate. This means that according to linguists and scientists who study language, there is not enough evidence available today to prove its existence of relation with any other language.

On the surface, Korean resembles Japanese in many ways, both syntactically and stylistically. These two languages are theoretically grouped with a larger language family called “Altaic,” which includes Turkic languages and Mongolian. For anybody who knows Turkish, you'll probably find a lot of grammatical similarities with Korean. However, as linguists point out, there isn't enough evidence to prove that a relation exists.

Korean is different from English in virtually every possible way. To learn Korean through an English construct or English way of thinking is misleading. Although Glossika does teach you a large number of sentences and patterns via English, you'll soon find that such a crutch will have to be dropped once you start getting into real Korean conversations.

For example, our sentences may introduce you to pronouns about who is doing what, however Korean isn't just a pronoun-drop language -- it is actually a stylistic difference as well, as there is no marking of who does an action on the verb (verbs don't conjugate in the European sense). Stylistically speaking, the doer of the action is supposed to be obvious based on the context of the conversation.

This means that in many of the sentences that you learn, much of the identifying information can be dropped in real conversation. 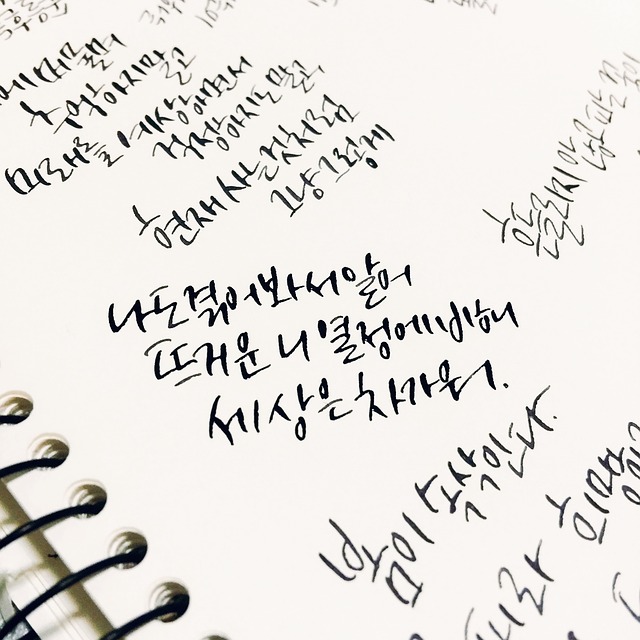 To learn to speak Korean properly means that you need to start thinking about how the Korean construct a sentence from their way of thinking. We find that this is true for most East Asian languages, including Chinese, which is just as much as different from Korean as it is from English. Because of this, it's important to learn Korean by example as a native speaker would speak rather than constructing what you think would be a valid Korean sentence. Saying something that you believe is a complete idea both logically and semantically but what a Korean person may not be used to or may not have heard before could result in a complete misunderstanding or just nonsense to the native speaker. Rather than translating from your native language to Korean, you'll have to "translate" your translation into a Korean way of speaking. This is why we recommend learning through example sentences until you have a better sense of the grammar structure.

As a foreigner coming into contact with Korean for the first time, a basic level of respect would be expected -- after all, this is the first time you've met the person and feelings can be offended quite easily with the wrong choice of words. A major difference with how most western languages are becoming less and less formal: people are opting for the informal you (tu, du, ty, ты) over the formal you (Usted, vous, Lei, Sie, vy, Вы) as quickly as possible when meeting someone. Take note: this is not a trend that you'll want to continue in Korean. It is best to stick with the person's name followed by -ssi 씨 instead of using "you".

With a mastery of the Korean alphabet and strong understanding of Korean pronunciation and grammar rules, take the next step by signing up on Glossika and starting Glossika's audio training.

By using training yourself to comprehend the sentences presented to you instead of trying to memorize them through traditional means, you are able to internalize what you've learned much more effectively in a natural and intuitive way.

No credit card info required and no commitment. Sign up on Glossika and start your free trial:

Develop the right attitude by using awareness and antifragility to achieve fluency. The right tutors don't tell you you're wrong but rather help you...